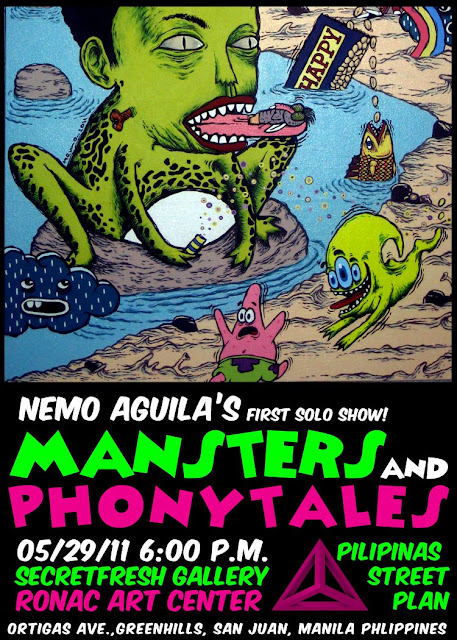 This is the place where nightmares and princesses dance together.

In Nemo Aguila’s first one-man exhibition MANSTERS AND PHONY TALES, he decides to delve insidethe play zone of his own unconscious, drawing out colorful creatures that have influenced both his pastand present life as an artist, and more importantly, as a child.

Or if you look at them, perhaps, an amusing combination of both.

Within his recent collection of works, the artist transforms characters encountered during his childhood
into gruesome things that grew an extra pair of eyes or sharpened teeth, images which are much closer
to the graffiti characters that he had been painting and marking on walls for years now. Nemo comicallydescribes them as “Snow White meets Freddie Krueger” or “Batibot gone wrong” instances. This may bea simple symbolism for the bridging of two timelines in his life, of innocence and the slow destructionof it, and basically the realization that as we grow older, these fairy tales, as we knew them, are nothingbut timeless, classic tales bastardized by Disney and the deception of worldwide consumerism.
But it’s not at all this dark. The artist focuses mainly on the humorous, lighter side of it. He makes fun
of its absurdity by vandalizing these faces and forms the same as he does with walls and other objects
that needs to grow a little life and excitement. From these juxtapositions of multicolored monsters,
Nemo explains that he is only exaggerating unusual facial expressions such as the opening of the mouthbecause of its rather strange and uncommon nature. He also includes famous graffiti characters of hisfellow artists in his works to pay tribute to the raw culture of street art in the Philippines.

The artist also expounds that the inclusion of popular Filipino brands in his paintings is another way
of giving a Filipino identity to his art instead of embedding it with flags and stars as they are quite
overrated especially these days. These local products are well-liked but ironically low-profile, especiallywhen compared to other snacks that are more famous, and obviously much more expensive. Thinkstreet foods and one-peso packed peanuts. This may be because as an artist, Nemo worships the
language of the streets, and effortlessly mirrors it through his art in a complete atmosphere of chaos,
wit and color.