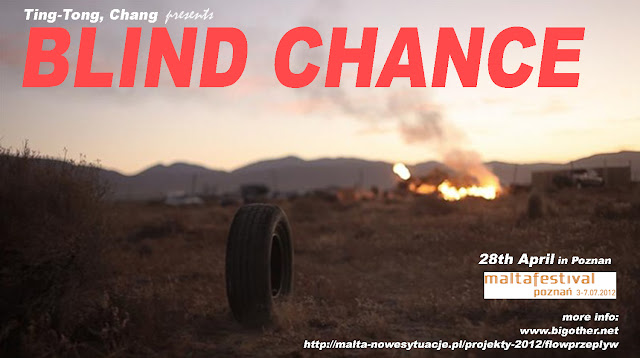 Blind Chance
Ting-Tong, Chang presents you a disastrous road movie.
The project is titled Blind Chance: a bus is hired and covered with black curtains. Around 20-30 Polish will be invited to join the trip. No age, sex nationality requirements. In the circumstance of the destination untold, they are given black masks and cover their faces. In the total darkness, the trip begins: the bus starts its tour around the city. It follows an irregular route designed to confuse the passengers. During the travel, a recording starts to play—10 foreigners talk about their sweet dreams and nightmares in Poznan. Deprived from vision, the passengers participate the dreams by their sensibility: by sound, movements and vibration of the engine. The bus slowly drives out of the city and heads to the middle of nowhere—it stops in several different spots, chosen purely by random. Each spot, one passenger, chosen purely by random, will be taken out of the bus and finds his/her own way home. The bus carries on its journey until all the passengers are emptied.
The journey ends when the recording finishes.
www.bigother.net
http://www.malta-festival.pl/index.php/en/aktualnosci/9,2,1,334,invitation-to-malta-2012-europeasia-idiom

Ting-Tong, Chang  www.bigother.net
Ting-Tong, Chang, born 1982, won his MFA at Goldsmiths, University of London. His artistic practice covers both street art and elements of traditional painting and sculpture. Most interested in urban space and exploration of potential dialogue between institution and individuals. Originally from Taiwan, lives and works in London, he organized numerous artistic interventions and events in the streets of the cities. His installations marked with brevity and absurd objects getting to the core of contemporary problems: globalization stimulated by the developments in technology, blurred boundaries between nations, or the omniscient fear of terrorism that we have already got accustomed to. Freely and with a wicked dose a black humour, he toys with such concepts as death, war, or mass destruction, which have become ingrained in today’s world. Ting-Tong has exhibited and received a number of awards internationally, including London, Berlin, Warsaw, Miami, Hong Kong, Beijing and Taipei.