who is ubec? by uzi 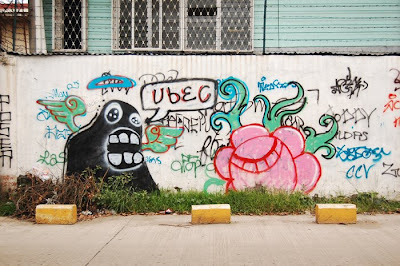 Ubec is a collective of individuals who share a passion for street and/or street-related art, and a common dislike for police authority (pun intended). As its name suggests, Ubec is not stereotyped into a particular subculture but constitutes Cebu Street Art in general.
Ubec, therefore, is not an exclusive crew, but is open to everyone who shares the same interest in graffiti and sticker art. It's currently recognized members are influenced by different musical tastes, have different jobs, and go to different schools (as a matter of fact, only 1 of its current members actually goes to school).
The Ubec Crew does not claim to be the best, or the first, or the fastest, or the meanest, or the gayest crew. What Ubec wants is to somehow create a single, unified circle of Cebuano street artists.
Ubec started out as strangers who literally met each other while doing street art. Its core lies in its history, and a new sticker on the wall meant a new affiliate.