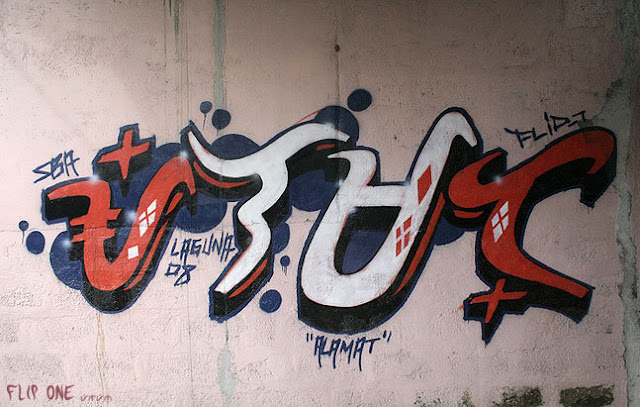 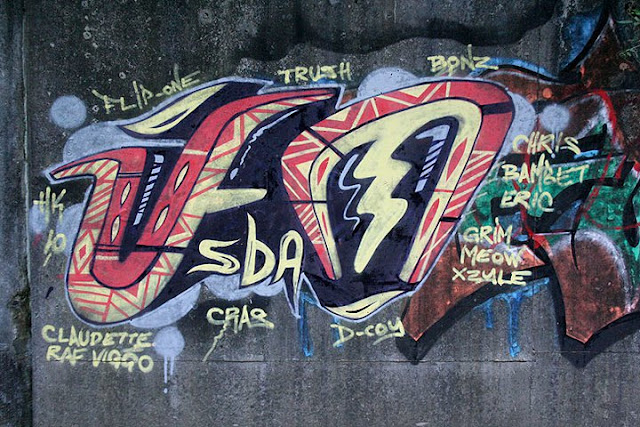 My introduction to graffiti started in Metro Manila back in 1990. That was the year when hip-hop blew up in The Philippines and the emerge of Pinoy rappers and rapping in Filipino. I read an article about NY graf in a magazine and I was fascinated seeing pictures of graffiti in subway trains/walls in unique letter styles and colours. I thought it would be cool to do these in Manila's walls since back in the days, there were only plain scribbles whether its political messages or names of 80s bands, etc. I showed the article to my best friend Chris and we grabbed some cans and hit-up some walls. We then formed SBA in 1993.

Back when we started, we didn't have a specific name. We wrote various words from "scumm" to "tribe" to "hip-hop". Later on I decided to write "Flip-1" and Chris wrote "Flow-1". I thought the name itself sounded cool and other than "pinoy", "flip" is a slang term for Filipino, I got the idea of adding the "1" in the end since alot of NY writers had a number and I decided to choose "1" since me and Flow-1 were the first to hit up in our city. Besides, "Flip-1" sounded better than "Flip-2" or "Flip-3".

Flow-1 and I bombed alot especially back in the 90s. I don't know if there are other writers in our city but we were the only ones back in the days. Hip-hop was getting big in Metro Manila but alot of youths were getting into gangsta rap and were forming gangs. While they tag their gang names, we were hitting Manila walls with tags and 2 colour throw-ups which we first introduced in this city. We did a few pieces as well but it was crap since we didn't have resources and graffiti mags till we got hooked to the internet which was new at that time. We started bombing within our area which is the eastside (Marikina, Taytay, Pasig and the likes) then later on, we bombed all around Metro Manila hitting any wall we could see. We got away smooth and never got caught by the cops.

Later on in the mid-90s, the internet was introduced and cyber cafes were all around Metro Manila. I discovered one of the best graffiti site which is Art Crimes and there, I was able to get more flix and more variety of styles. From there, I was more hooked to piecing. I was more influenced by the NY styles and my early pieces resembled it.

I got more serious with graf when I moved with my mom to Hong Kong and lived there around '96 to '97. 1997 was an important year in HK since it was the colony's handover to China. It was cool city but there was hardly any graf in HK except some pieces done by the KRC crew and a mural at the former BFD skate shop in Tsim Sha Tsui. But HK had graffiti books and mags and its where I bought my Subway Art book. While living in HK for 2 years, I managed to do some pieces at the Jardines Lookout Hall of Fame, a legal production in Tsim Sha Tsui and tagged alot in Central. And in this city, I met alot of local and international writers and its where I attempted to create my own style which is more Asian than NY. Hong Kong became my 2nd home and I make frequent trips there after moving back in Manila.

Nowadays. I write with an ethnic baybayin style. Baybayin or alibata is the Philippine alphabet prior to Spanish colonization. I'm half Tagalog half Ilokano but my Tagalog side is stronger so I use the Tagalog alibata script when I paint. But I write my name with a block-style English alphabet when I bomb. This is the style that Bonz and I developed. But there is more than writing my piece in Baybayin, I add Filipino elements to it like patterns of locally made tapestry.

Graffiti is what I love to do! I paint cause I enjoy doing it and show people a bit of Pinoy culture through my graf. I don't seek fame nor commercial status. I just want to hit up for people to see my shit doesn't matter if they like it or not. I paint with anyone as long as they are nice and don't have that dick attitude.

That's all for now. Much respect to the graffiti writers out there! FLIP-1 SBA CRU represent!