By streetkonect July 03, 2012
In the July 1st issue of Banat News, a local tabloid in Cebu , the front page photo featured 2 boys painting on a wall along the street with the caption: 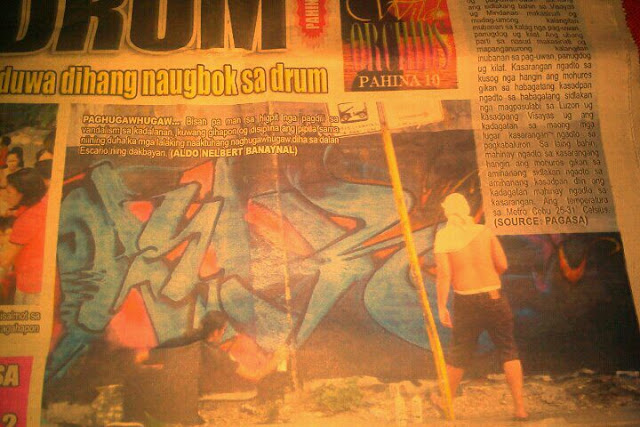 VANDALISM. Even with the strict law against vandalism, some people still lack the discipline like these 2 boys who were caught in the act of vandalizing a wall in the streets of Escario.(Aldo Nelbert Banaynal)

We will try to dissect the caption above!

“Paghugawhugaw”
If these boys are vandalizing the streets, they would not do like this! 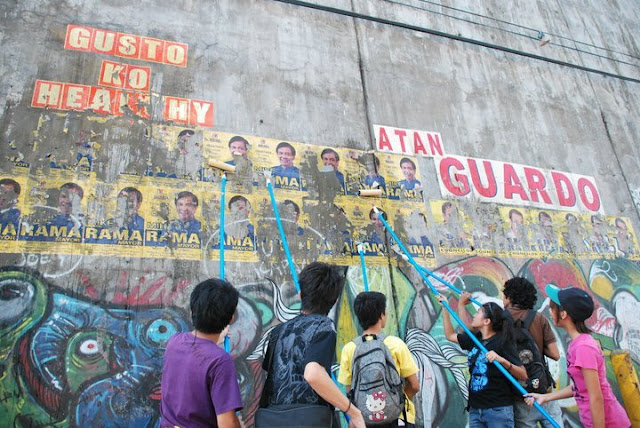 (The "duha ka mga lalaking naaktuhang naghugawhugaw" (2 boys who were caught vandalizing) are part of an art group which is responsible for painting walls in Cebu and the Philippines)
And of course the result will not be like this!

I want also to be fair-- “vandalism” is rampant in Cebu( spraying their alter egos) but as much as their group is concerned, their task is to elevate the existing egocentric writing names into an art form! And Cebu is the city that has a good roster of street artists. Well, at the end of the day, art is so subjective that what is aesthetically pleasing for me, may be crap for and “paghugawhugaw” (vandalism) for the editor/photographer.
"kuwang gihapun og disiplina ang pipila sama niining duha ka mga lalaking…"
It is so unfair that they stated that the boys “lack discipline” I think it is the other way around. The two boys photographed were so disciplined that days before the Sulat Kamay Competition, they were so busy furnishing their skills as an artist. If they win they will represent the Visayas League for Wall Lords – Philippines this September, and if they win again they have the chance to represent the Philippines for the Wall Lords in the last quarter of this year!. A task that is equal given to Philippine Askals or Manny Pacquiao or Arnel Pineda!

"Bisan pa man sa higpit nga pagdili sa vandalism sa kadalanan,"
Ubec Crew knows that vandalism is illegal and many of its members suffer from it, that’s why as much as possible they try to ask for permissions whenever they paint a wall! The walls in Escario to be exact, along old SSS and across are "legal walls" meaning, the crew had asked permission for them and their request to paint there were permitted by wall owners. I cannot say that the current piece that was photographed follows the same order, but the norms of the Ubec crew is that whenever a wall piece becomes got dirty they automatically paint over it. That is the Unwritten Law of the Escario Walls. Cebu City is so lame that they do not have a single gallery that caters to new art! We don’t even have a formal gallery that people will go to, see an artwork and act as a cultured human. Some may argue that we have few, but OMG( insert Manny Pacquiao’s voice ) we are bombarded with century old styles older than Salon des Refusés.
"naaktuhang naghugawhugaw diha sa dalan Escario ning dakbayan."
I already defended the word “paghugaw-hugaw and the story of Escario walls above.

(ALDO NELBERT BANAYNAL)
I think he is a good photographer, and it is not the first time he took this kind of photo. He is an established photographer who is not like the rich kid type who can just use DSLR as a pendant. People from a Facebook page misinterpreted him as the one who wrote the caption on the photograph, but he comradely defended himself along with his friends that the editor has the last say in whatever goes on print!.He said that the original caption that he submitted should be:
“"Amidst the given order of the city government to regulate graffiti activities in the metro there are still some youngsters who continue to defy rules in order to express their art. Just like this one in Escario street which is a favorite area for this artists to do their "bombing".
It turns out that the real villain in this whole Facebook debate is the editor and Aldo is the Uchiha Itachi. I cannot imagine how to be a photographer on a newspaper and they would  edit the original caption of your work. A cat could be captioned as a goat!
Well anyway, we have also to see all angles.  Editors should "edit" the words so these will catch people's attention and buy the paper! The “revision” of the caption by the editor had so much impact that I bought a Banat tabloid for the first time!
Artists should be open to criticisms and “bad name calling”. They are vital to the history of arts. Impressionism was a derogatory word used by critics to describe the works of Monet and others. Low-brow was also a derogatory word! Why not make a Hugaw* Art Movement?
Sorry for being carried away. Well artists should be thankful to Aldo and to all the photographers who document street art work. Street art because of its ephemeral character, needs something beyond the original artwork in order to be more appreciated. If without Martha Cooper who documented pieces during the 70’s of the early New York graffiti movement, the movement would be different. Lots of famous street artists around the world credited “Subway Art” as their bible in their early stage as an artist. We should credit also the photographers and journalists who risk their lives trying to show the world to us! Capturing images is so dangerous! Mon Tulfo received tons of kicks and punches from Claudine Baretto, much more risk from a photographer of Nat Geo! Well, the duha ka mga lalaking naaktuhang naghugawhugaw diha sa dalan Escario ning dakbayan are harmless than a Claudine Baretto or a tiger from Timbuktu!

*Hugaw is the Cebuano term for dirty.