Assembly Line: The Art of The Junks Collective 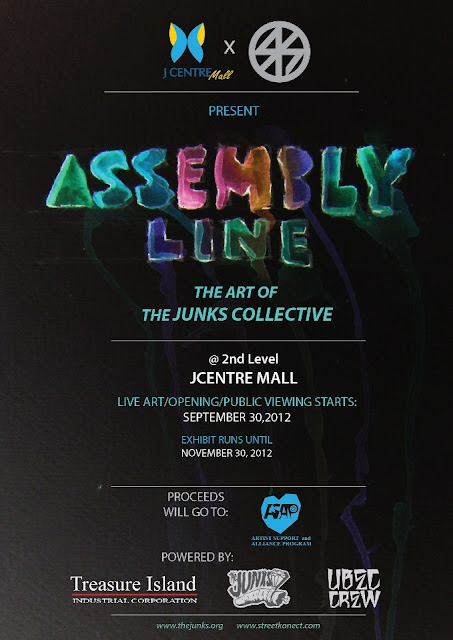 Assembly Line
The Art of  The Junks Collective


The Junks Collective was established by the pioneers of graffiti/street art in Cebu known as the Ubec Crew as a way to find different outlets in their artistic production aside from graffiti and street art. The group ventures in various kinds of art forms as way to sustain their daily needs and to fund the luxurious and expensive hobby of street art and also a way of extending their crafts into other fields of art like gallery exhibitions, tattoo, graphic design, prints, music etc. The group marked their first line in the indoor exhibitions when they joined the Visayas Bienniale last 2010, the Art Triviata in contemporary art gallery and Cebu-Manila art exhibition.

For 2011 there was a hiatus in the groups collaborative works when some of its members became successful as a solo artists. This year they get back on track as a team when they had their group exhibition last July entitled “The Fuck you Show”

This time “Assembly Line” exhibition got their inspiration from a factory type of production as their individual styles and artworks are combined to create an aesthetically unified piece. As a graffiti artists Adrenaline is a vital ingredient to their artistic production, the group is given a 4 day period from September 27-30 to finish the artworks but not on their normal collaborative space(Junk Shop 2008-2011,Junk Studio 2008-present) but inside JCentre Mall. Public viewing starts on September 30, 2012 with live painting. Exhibition is until November 30, 2012 at the second level Jcentre Mall in Mandaue.

The proceeds of the exhibition will go to Streetkonects's Artists' Support and Alliance Programe, a funding project by Streetkonect to help street artists continue their craft.