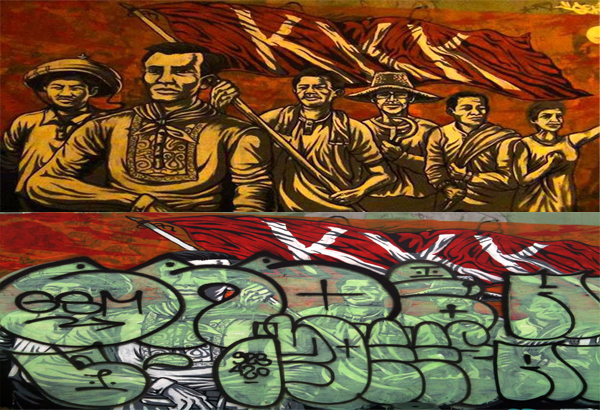 MANILA, Philippines - A mural at a Quezon City overpass, depicting Andres Bonifacio and members of the Katipunan, has been defaced by vandals, a youth group said yesterday.
Rodel Adiao, spokesperson of Alyansa ng Kabataang Lumalaban para sa Sambayanan, said the incident showed a lack of recognition for the heroism of Bonifacio and the plight of the Filipino masses to be free from the Spanish colonizers.
“There are very few chances that the public could stare at such a nationalist mural outside of art galleries and museums, and then we just lost it instantly,” Adiao said.
The mural, painted by a group called Ang Gerilya, showed Bonifacio with his comrades bearing a flag of Katipunan.
The country is set to celebrate the 149th birth anniversary of Bonifacio on Nov. 30.

Vandals and deface might not be the right term.