Shingeki no Culture: Attack on Art 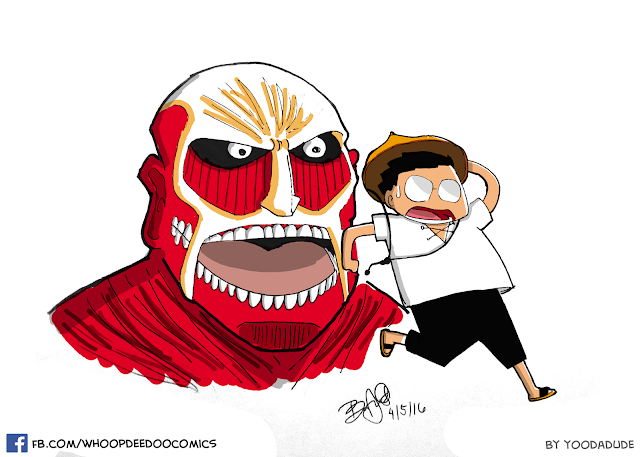 It’s no profound discovery to find many Filipinos patronizing foreign products and foreign media over their own.

Many of our people shamelessly deep-throat imperialism so precociously while dreaming of white parades to last eternity. The typical Filipino happily spends wads on whitening creams, lotions, pills, soaps and would willingly dance in acid rain if there was a chance it would wash the brown of their skin away.

Filipinos gobble up foreign brands and wear it like a badge on their face – because yes, this bag is Gucci and yes, it comes from Italy, Ate. For the conyo S-girl, there’s absolutely no time to waste on good local indie cinema because the new Divergent installment is out and she’d rather watch a proper movie, a Hollywood movie, then spend hours of her time puzzling over Hele sa Hiwagang Ipis.
Just recently a local DJ from a local station denounced local artists saying that if their music didn’t make it to the States, he wouldn’t give it the time of day much less time on air for play. Jesus, people, only Billboard top 40 here, please!
Without a doubt, the cost of colonization cuts deeply. A hundred years of so-called independence and here we are, pining for more of honey-dewed U.S.A., struggling with feelings of local inadequacy. And as if the Filipino chase for the American Dream here in the Philippines weren’t enough to stymie the local art, music and media industry, another wave of foreign obsession comes along to stand in the way.
And this time it comes from the fair Japanese chinks in the east. This time the battle comes from the rising otaku.
Otaku. We used to see them in bright, eccentric pint-sized circles in Otakufest and ArchCon. Now they’re just about everywhere here in Cebu; a growing subculture to reckon with. Year after year the number of costume-clad chans, kuns, and senpais multiply exponentially along with the mall-sponsored conventions and cosplay fests that have started popping like pimples all over the region. With easier (though still ridiculously sluggish and overpriced) access to the internet, day by day newcomers start crumbling over to the fan-all-you-can buffet of free uploaded manga and anime. Yet as this army of otaku expands, one must wonder, where does local art and media stand in its wake? Does this foreign-based media and its creeping subculture encourage the development of local art, or does it compete with the local creative industries and stand in the way just like the chase for all things Americano?
To get to the heart of the matter, first of all, we must ask the question – what exactly is an otaku?
In a compact and crude definition, the otaku is a form of geek overtly obsessed with Japanese media. Most of the time this takes shape in manga and anime, and many otaku subsist on either or both on a daily basis. They love to collect trinkets and expensive figurines, sing and dance along to their favorite anime openings, go to conventions dressed as their favorite characters and speak in high-pitched, pseudo-Japanese. Some even try to take Japanese studies seriously, either as an attempt at cultural appreciation or an attempt to watch their favorite series subtitle-free. The otaku are as docile and as harmless as a bird – however loud and eccentric they may be.
So how can these quirky, Japanese-babbling geeks be a threat to local art?
Being an otaku doesn’t entirely impede the creation of art – in fact, many established and aspiring artists claim that their affairs with anime and otakudom propelled them to pursue the creative industries. To some artists, anime and manga were launch pads that helped in the development of their own personal styles. Some even say that anime continuously opens them up to new material and new creative perspectives. Even the proponent of this article (yeah, that’s right), a reclusive but well-adjusted otaku, will also admit wholly to the accusation that her trifles with anime and fanfiction had been part of her growth as a writer as well.
Because to have local art spring from the threshold of foreign media is not heresy.  Sources for art and creativity are not limited to the horizon of the locality; art comes from all sorts of places, above and beyond, inside and out.  Ultimately, in the God-like act of creation, we all take parts of ourselves, parts of nature and parts of each other in an attempt to transmogrify a swirling pastiche of thievery into something new.

“Steal from anywhere that resonates with inspiration or fuels your imagination. Devour old films, new films, music, books, paintings, photographs, poems, dreams, random conversations, architecture, bridges, street signs, trees, clouds, bodies of water, light and shadows. Select only things to steal from that speak directly to your soul. If you do this, your work (and theft) will be authentic. Authenticity is invaluable; originality is non-existent. And don’t bother concealing your thievery - celebrate it if you feel like it,” Jim Jarmusch, an independent film maker eggs the creative-minded quite compellingly.

Artists, musicians, writers, creators, dreamers - everyone takes ideas from some place. It’s easy to find inspiration nowadays, especially in an age where boundaries have blurred thanks to the millennial god called the Internet. Sources of inspiration have become an endless kaleidoscope stream of clickbaits, advertisements, and sometimes, useful information. Artists can take ideas from anime, from manga, from geek pop culture, from obscure art mediums, and even from artists within the locality. It doesn’t matter as long as the artist creates something new in the process. In the vindicating words of the 1960’s French New Wave film movement icon, Jean-Luc Godard, “It’s not where you take things from – it’s where you take them to.”
So to answer the question so imperative, does otakudom assist in the development of local art? As a source of ideas and as a frame for developing personal artistic style, it does.
But it also obstructs local art as well.
Most often than not, Otakudom becomes a rabid obsession. It starts out as one – one episode of an anime series, one volume of manga.  But just like potato chips, you just can’t have just one, so you go and do two, then five, and then soon you find yourself sleepless as you finish the entire series by the break of dawn, spiraling into mayhem.
You find yourself charmed by the exaggerated eyes, the fluid motions, the eccentric plot twists, and the exotic oriental culture and then soon enough you start wishing you were Japanese. And in your delusions you start speaking Japanese, eating Japanese, dressing Japanese (otaku/Shinjuku style at least), purchasing Japanese and even dreaming Japanese.
In this obsession, where exactly do we find the support for local art and the creative industries? Tucked away in a box between dimensions of reality and instabilities in space, hidden behind the insatiable need for anime, manga, the kawaii, and the kakkoii.
So now let’s start the blame game, point fingers and slap our hands on our faces in disparity.
Do we blame the young ones for being so easily swayed by otakudom? Do we blame people for enjoying anime? No, everyone has the right to their own interests and eccentricities. We just wish that those interests would include a heavier bias towards the local creative industries – in local comics, literature, film, music and animation. But it’s so hard for these industries to compete with foreign media ( including Japanese anime), especially when our creative industries are often left crippled, underexposed and underfunded.
Though the different flag-bearers and warriors of these industries are working hard at reaching out to the youth and to the masses, exposing them to their art through  music gigs, through film screenings, exhibitions, street-art displays, literary conventions and festivals, we still have admit that the struggle is hard; the struggle is real.
It is no easy feat trying to organize an event for exposure, especially when you find little government support and less private sponsorships.
Sure there is internet, and local creatives could (and do) upload their material online, but how to gain a radical following when the audience is too busy looking away, charmed by the kawaii eyes of anime and other foreign types of media?  And then how do we get steal audience’s attention back to the industries when the means for exposure is limited?
It’s a vicious circle really. There are many factors that come into play.  So many threads are entangled in a twisted clump of yarn with no visible end to tug at.
So what do we do?  Well, we wouldn’t want to tell you what to do. That’s not the purpose of this essay. This is just a roughly-hewn and entitled presentation of ideas. Dismiss this essay, or do something about it. It’s all up to you.
Now excuse me, the proponent of this essay has to finish reading Uchuu Kyoudai Vol. 12.